Written by
admin
Posted in
Général
Comments
Leave a comment

In the mass migration to hi-def everything, phone service has been left behind. In fact, the basic speech technology in traditional phone networks has not changed in 75 years. However, new digital technology has arrived that greatly improves sound quality, by intelligently using abundant bandwidth available with broadband connections.

TurboBridge is at the vanguard of this evolution, delivering HD Audio quality by incorporating the ITU Standard wideband speech codec called G.722, along with the Opus codec developed by the Internet Engineering Task Force (IETF).

Delivering a naturally-sounding conversation via audio conferencing requires sophisticated technology, normalizing sound levels, filtering background noises, and balancing audio streams. With HD Audio, the clarity of speech is greatly enhanced, and individual voices are easier to differentiate and understand, more closely simulating the experience of being the same room around a conference table.

It’s All About Codecs

Sound quality is determined by the amount of data that is digitally sampled, transmitted and repackaged to reproduce the speaker’s voice. Historically, telephone networks have used technology (called codecs) to minimize the amount of bandwidth required for transmission — so they could carry more calls using the available capacity. Given the relative scarcity of wireless spectrum, mobile phone companies use more aggressive compression technology, which results in poorer sound quality. (To provide better quality would require either more spectrum, which may not be available, or smaller cell sites requiring many more towers.) That’s why cell phones sound worse than landline phones, and why phone calls don’t replicate your actual speaking voice.

A look at the numbers highlights the issue. There are two key factors:

During normal conversations, humans produce sounds from 80 Hz to about 8,000 Hz, with most normal speech occurring between 300 Hz and 3,000 Hz. (Singing or screaming can be outside this range, as you’ve

no doubt noticed on phone calls.) Based on this, the traditional telephone networks were designed to transmit frequencies up to 3,400 Hz. The primary goal was to deliver sufficient quality to be understood, not to replicate speech quality.

There are three major codecs used by today’s telephone networks:

The table below compares these codecs with the G.722 HD Audio codec:

Opus is a configurable codec that can accommodate the full audio spectrum in extremely high-quality. With TurboBridge WebCall, we configured our Opus codec with 16 kHz sample rate supporting an 8 kHz frequency range to provide HD Audio quality, operating at a 20 kbps bit rate. The lower bit rate translates into better performance than G.722 in cases with an imperfect broadband connection. Opus adapts well in conditions where you may encounter bandwidth congestion or lower broadband speeds.

The bottom line is that both G.722 and Opus provide a far superior audio sound, delivering a more natural conversation, with better clarity to discriminate between letters “S” and “F” or “P” and “T”. This is especially true among female speakers, whose voices generate higher audio frequencies.

Many callers can experience TurboBridge in HD Audio by using TurboBridge WebCall, a browser-based application (using WebRTC technology) which allows callers to connect directly through their computer’s broadband connection, typically using a 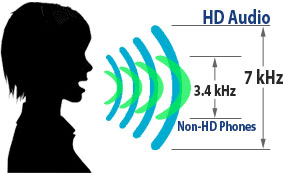 headset (as with Skype). TurboBridge WebCall works through the Chrome and Firefox browsers, without requiring a separate software program, and utilizes the Opus codec to deliver HD Audio quality.

Of course, you don’t need special equipment to use TurboBridge. Anybody can access TurboBridge conference calls by dialing into the conference bridge with regular phones, through Skype, or with SIP phones not enabled with the G.722 wideband codec, and still experience outstanding quality, even without the added benefit of HD Audio.